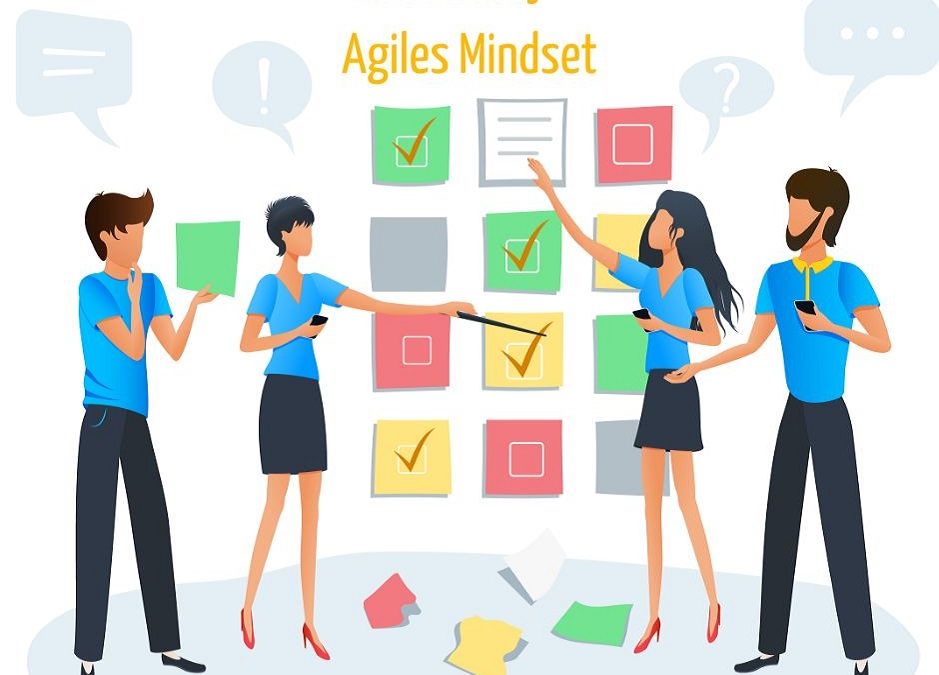 Whether a team or a manager has an agile mindset usually becomes apparent in everyday life. In this case study, we present two perspectives from two managers and their teams, both of whom describe themselves as “agile”. We invite you to read the two descriptions and see for yourself….

The team has eight members and is led by a line manager. This line manager tries to teach his team to work self-responsibly and independently and to achieve the set goals.

The team comprises relatively young people who have only been there for a short time and two experienced colleagues who have been in the manager’s team for several years. The two professional colleagues have each been assigned three new colleagues whom they train and to whom they distribute the work so that everything can be done.

To strengthen the team’s ability to organise itself, the manager has proposed to work with a Kanban Board in the future to see better who is “working on which topics”. The Kanban Board should be kept in electronic form, and the manager would like access to the Team Planner to read it.

In addition, the Manager has initiated a weekly jour fixe to ensure questions, exchange and coordination. Every morning, the team members meet at a fixed time for 15 minutes to discuss the day’s work.

The manager is satisfied with the new structure because it gives her a good overview. However, she finds that the team members constantly complain about stress and too much work, things do not get done, and the commitment to promises could be much better.

The manager tries to help the employees move forward through clear communication and support. However, they experience themselves more and more as controllers or tamers when something doesn’t work, and the individual team members mainly look at the fact that they are “not to blame” for the problem that has arisen. The problem is solved relatively quickly, but it usually needs the leader’s help.

There is so much to do in terms of content, or the challenges are constantly changing that the things the team decides to do for the week on Monday are often already obsolete by Wednesday because new tasks are always being dumped on the team from above or from the side, all of which are urgent. On Friday, only a third of the issues with the individual team members have often been completed.

After four weeks of testing, this manager concludes that the modern bells and whistles are nice and colourful, but unfortunately do nothing to increase efficiency in the team because the manager still has to organise the group.

This team also has eight members and is led by a line manager. This leader has recognised that her team has high potential but is still in the early stages of development, as there has been a significant change recently, and only 50% of the team members have long experience in the team.

This leader relies on employees learning how to work together and how each team member can quickly bring their strengths to the team.

This team has defined common values and rules according to which it wants to work together. In addition, there is a meeting structure that helps the individual team members do their daily work on the one hand and, on the other hand, also to exploit the team’s creative potential through consistent joint working.

The team has a clear team mission that each team member knows. In addition, the freedom the team has to make decisions is clearly defined.

The team jointly considered how best to manage the increasingly fast and flexible organisational requests and decided to organise its activities via a Kanban board on the one hand and to work cyclically on the other.

Every morning, the team meets to briefly discuss what’s coming up for the day and who needs support from whom. The manager has not had to attend these meetings for a few weeks now; the team moderates the discussion.

The manager is involved in the weekly review at the content level but not in the process review. The team organises this itself and also formulates learning steps to become better. If the unit needs support from the manager, the manager comes in. In most cases, these are issues for which the team is not responsible, and the manager helps to clear these “obstacles” out of the way.

The team meets with the manager monthly to discuss the “roadmap” for the following month. Around 70 % of the time is then spent on the topics that can be planned, with the team members jointly assessing what they can fit into the time available. The aim is to do a good job consistently and not become overloaded.

30 % of the time is reserved for short-term topics. Each topic is estimated and scheduled before it is dealt with. It is often possible to postpone seemingly urgent issues to the next weekly sprint. If this is not possible and 30 % of the time is almost used up, the team decides with the manager which topics in the backlog can be reprioritised. One thing is clear; a permanent overload is not the goal.

Consider for yourself which team and manager are further developing an agile mindset. Do you find the solution?