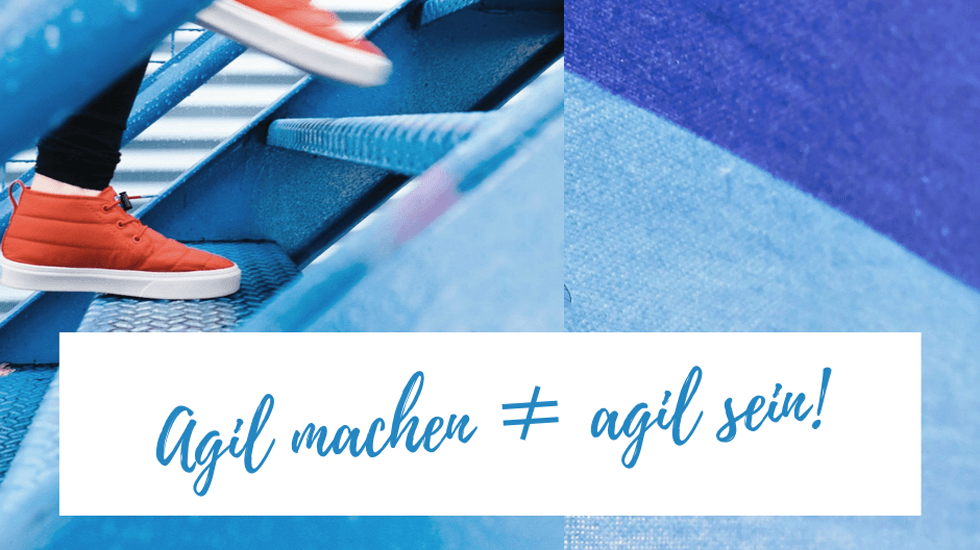 ” Do or be agile” – this difference has already been discussed several times. Mostly to emphasize that there can only be an effective form of agility if you not only establish agile processes, but are also agile. So it behaves like this and does not just follow new processes.

Many people are of the opinion that you can achieve more if you promote ‘being agile’ and not only implement agile processes. That’s what you hear or read again and again in agile communities. But that’s not the point here.

What happens if an organization decides to introduce an agile method and focuses on process improvement? Perhaps because it is the next sensible step in development, because there is actually a concrete desire for a better process, or for other reasons. Is such an agile development, i.e. being more focused on processes, meaningless? Does this mean that agility has no value in the company? Do we waste valuable time?

Let’s assume that there is a large organization that thinks about improving its own way of working.

Now this organization is starting to think in detail about what it can improve. It looks for a suitable agile model, adapts it to its own needs and defines a concrete implementation plan, nominates a project team and sets a time frame and a budget.

So far so good. So it is a change project as it is known and usually implemented. After introducing agile methods in the example, we call it an ‘agile transition’. Whether this is the best term for it, we leave for the time being left to one side.

Next, the new model (the agile processes) is implemented exactly according to plan and accompanied by a lot of coaching. After all, an agile transition also requires agile coaches to help the teams with the transition.

After some time things become more efficient. There are fewer misunderstandings about working together. The teams experience more structure and feel it is good. The environment is better integrated and probably begins to accept that.

But why did it get better? So far “only” one process has been introduced? It’s not that agile when you think of ‘being agile’!

Well, the efficiency has been increased. Things are done “right” now. The given procedures are now done with less effort. That sounds good, doesn’t it?

But is it also effective? So are the teams doing the right thing? Does this already result in a fast time-to-market across all the teams involved in the value creation process? Do they generate the highest possible value for the customer? Is there a self-image for value orientation? Do people invest their time in the right tasks? Do the teams even know what the right tasks are? Or do they just make the given things within their teams better, faster and more coordinated?

The concrete and conscious promotion of agile thinking is only important when it comes to becoming effective in delivering value to the customer. When it’s about every employee questioning existing patterns and being encouraged to improve things on an ongoing basis. Effectiveness means doing the right things. This means that it is not about improving a given process, but about finding the best way to get there. And if it makes sense to leave things out, then this should also be allowed to happen. But this requires a large framework of movement and at the same time clear limits within which a team can decide and act independently. And since cooperation across many teams plays an important role, it is not enough to be agile in the teams alone. It must be lived across the entire organization involved, including the management.

Many organizations are concerned with agile process improvement in order to become more efficient. The familiar is made better and this may meet the expectations of some clients.

The question remains as to what degree of agility one wants to achieve in the organization as a whole. Because the described change project has probably not really changed the facets of “being agile”, but mainly those of “making agile”.

The following can be deduced from these considerations:

Agility has various meanings. It makes a big difference what is meant by that, with whom one talks, which need on strategic level is the trigger for it, how large the organization is and starting from which hierarchical level agility is converted. For me as a consultant and coach, it is important to understand what the key stakeholders want to express with the term agility. By the way, sometimes it’s not that easy to find out.